Once a mount is tamed its necessary to keep them under control so they dont attack randomly, wander off, or fly away from the owner.

BUGS : There is still a few issues with mounts, especially with birds, that can result in loosing the mount IF the owner does not control them.

If you want to access the pet inventory the best method is walk up close to the pet and press F rather than hold E key. Using F as a habit makes it less likely you mount the pet and move it by accident! 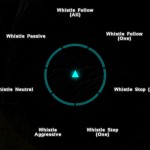 Press and hold T menu for the following commands : 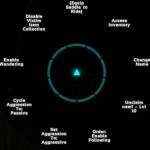 Press and hold E menu for the following commands :

Neutral – Mount will defend itself or its allies. If your pack of raptors all is set to “Neutral” and one of them get attack, the whole pack will attack the attacker.

Aggressive – Similar, one spots an enemy, all attack the enemy.

Passive – Will not defend itself or allies getting attacked.

Attack your target : The mount(s) will instantly attack the target their owner is attacking.

Beware: it is too easy to damage your own dinos and possibly kill them, IF you fight same enemy as them. This currently only applies if player is using a weapon, aslong as he/she is mounted its no problem.

Ptera is fast, agile, and a great scout type mount. It is fragile, have a bad habit of getting spooked and vanish incase of danger. Requires a bit longer “runway” than Argentavis. Its not a heavy lifter.

Argent is the slow, heavy lifting bird. Great for moving large quantities of metal from mine to base, or moving resupplies from base to an outpost. It usually lands in fraction of length the Ptera require (atm).

Press E to mount up, fly down to ground or “landing platform”, press spacebar to land (avoid using E for this!!).

Its recommended that all animals is set to “Stay” before being used, as this makes them stop faster when player jumps off their mounts. Especially important for birds.