Ingame map is a rough map of the island and detail level isnt very high.

The pin used to show position has a needle that is barely visible if zooming in on the map.

Zooming in can be done holding left mouse button, but will not work when on a mount!

Below is a map of some but not all settlements on the island.

” Tower by Xena ” is a high tower placed on a small sand island, and works as a navigation point for the ” lake area “. This lake area is w/nw of tower and is often frequented by carno, raptor, t-rex. Following the river north from this lake, it turns east/ne and its possible to find brontos in this area.

” Bronto hill ” is just north and bit east of ” Tower by Xena “. Northern part is a hillside frequented by raptors, maybe a carno, and usually a few bronto on the top of the hill. Southern side (lat 60+) is covered by dense jungle.

Purple line “misc” , refers to an area with misc settlements.

” Tower by Xena (red line) ” is an map editing glitch, refers to a new fort by “Studley Hungwell”

Misc outposts, mining camps and minor settlements not added to map at this point.

When refering to coordinates on the map , read vertical position (latitude) first , followed by horizontal (longitude).

Another method that can be used is divide each sector on the map in four, north-west, north-east, south-west, and south-east section of that sector. 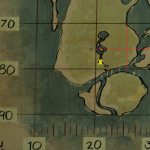 In above image taken from south center of map, the RED obelisk is far in background on left side. While blue obelisk is middle on right side of the image.

The green obelisk isnt visibile in the image but would be  just left of “W3″ thats briefly spotted in lower-left part of image.

Need any help navigating, figuring out something. Ideas for improvement to page or something, talk to Xena ingame.